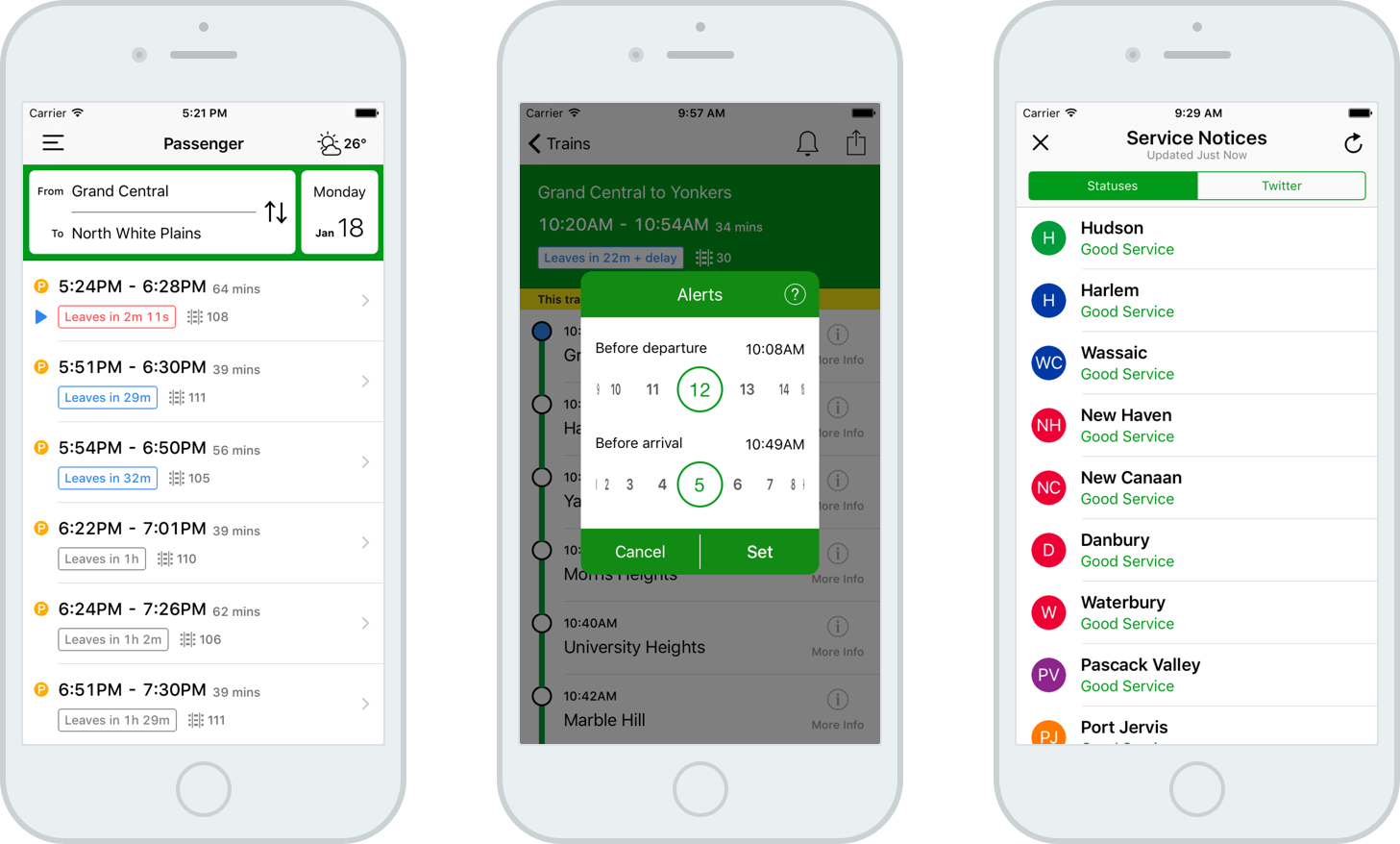 In the summer of 2015 I co-founded Passenger ― an app for daily commuters ― with my older brother. I was responsible for branding, designing the Passenger experience, and developing the iOS app. Together we grew Passenger to over 5,000 monthly active users, 1,000 daily active users, and well over 50 five-star reviews in the App Store. We made apps for three different railroads in New York (MNR, LIRR, NJT) and reached a combined 20,000 downloads.

Railroad commuters in NY take the train in and out of the city twice a day, five days a week. Unlike the subway, these trains are infrequent. This means commuters need to know the schedule in advance to make sure they arrive to the station on time for their train. To check the schedule, commuters used the transit agency's website, 3rd party apps, or paper schedules. However, all of these solutions did not empathize with commuters. They were unreliable, outdated, and were not personalized for each commuter.

We saw this as an opportunity to create a new schedule option and aimed to make it a product that improved the commuting experience. Commuting is notoriously a negative experience and we felt that the existing schedule solutions were only adding to that frustration. We wanted to make our product something that would be a part of a commuter's daily routine and improve how they felt after their twice daily commutes. 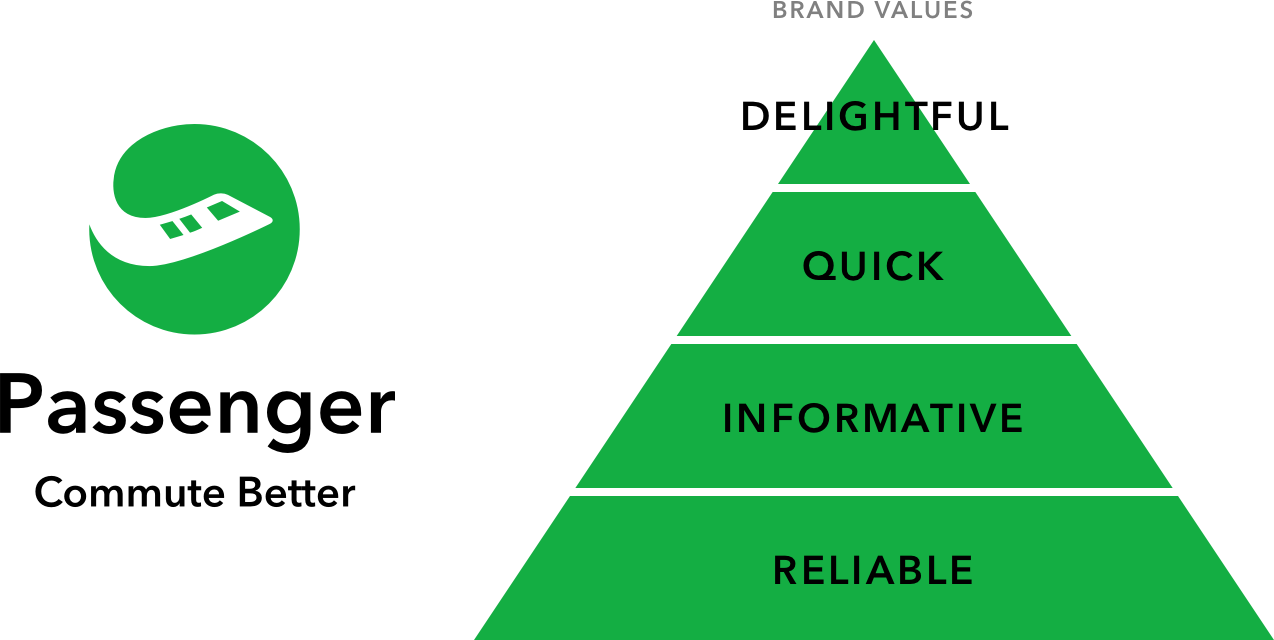 Since we were commuters ourselves, we had a good foundation to create a first version of an app that solved our own commuting problems. However, we also understood that commuters come from all walks of life so we set out to built a community of beta testers. We reached out to friends, family, and anyone who we sat next to on the train during our commutes (our form of guerrilla user testing).

Our beta community grew to 100+ commuters and helped us develop a more diverse understanding of the commuting experience. The beta testers also served as a way to test new features and catch bugs before pushing out changes to all our commuters.

We wanted to created a strategy for how we would iterate on Passenger. We arrived at creating a timeline of the key activities along the commuting experience. 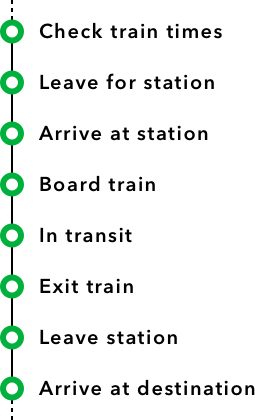 Commuting experience summary as a timeline.

At each of these key activities we aimed to create features that would solve pain points and incorporate delight. For example, we found some commuters would forget to leave for the station on time resulting in missing their train. To improve on this pain point, we added an alert that could be set to remind them to leave with enough time.

Another example was for those on the train arriving at their station. Here commuters would message someone to give them a ride or grab a taxi. To streamline these experiences we allowed you to share a train's ETA with your ride or order an Uber directly from the app.

In order to create a more direct channel of communication with our commuters, we added a “Chat With Us” feature so that commuters could share their concerns, questions, and feedback directly with us. 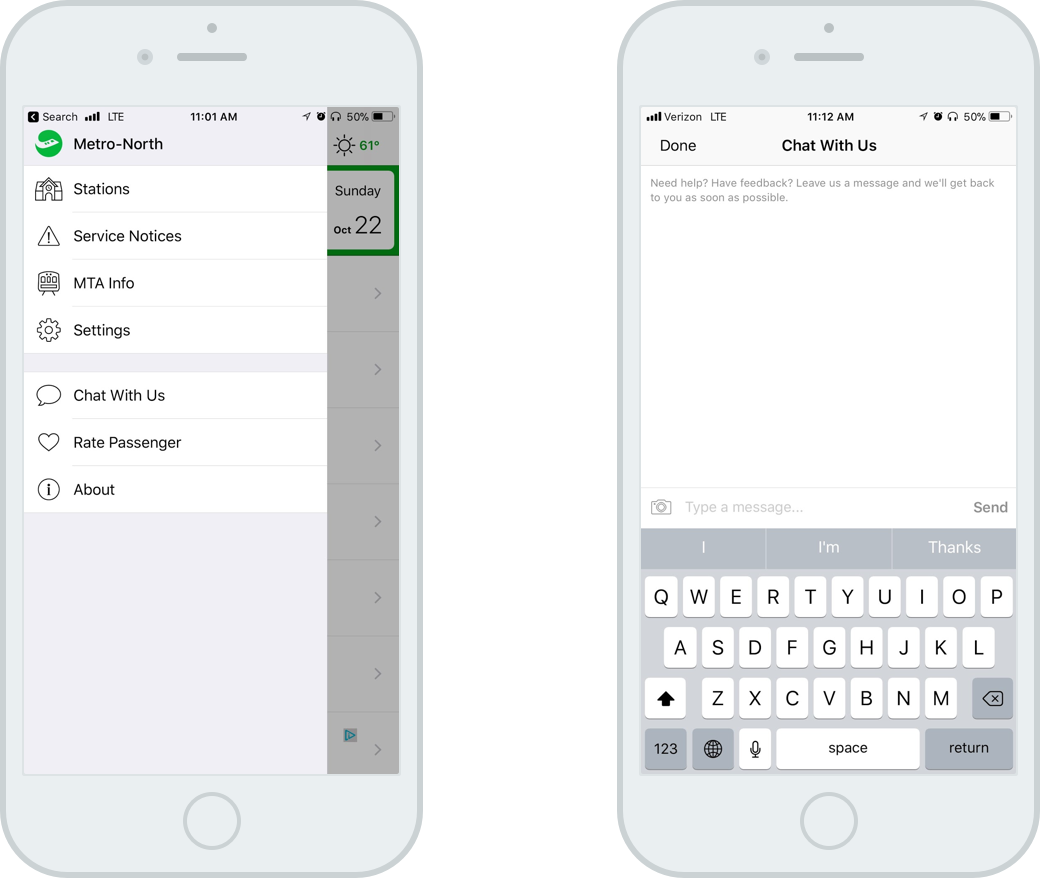 "Chat With Us" feature.

The "Chat With Us" feature became a crowd-sourced reporting system that allowed us to quickly discover issues with schedules and delays. However, our goal was to reduce these types of messages. We were consistently working on our schedule and live data, but these messages made it clear it was not quickly enough so we aimed at other possible solutions. 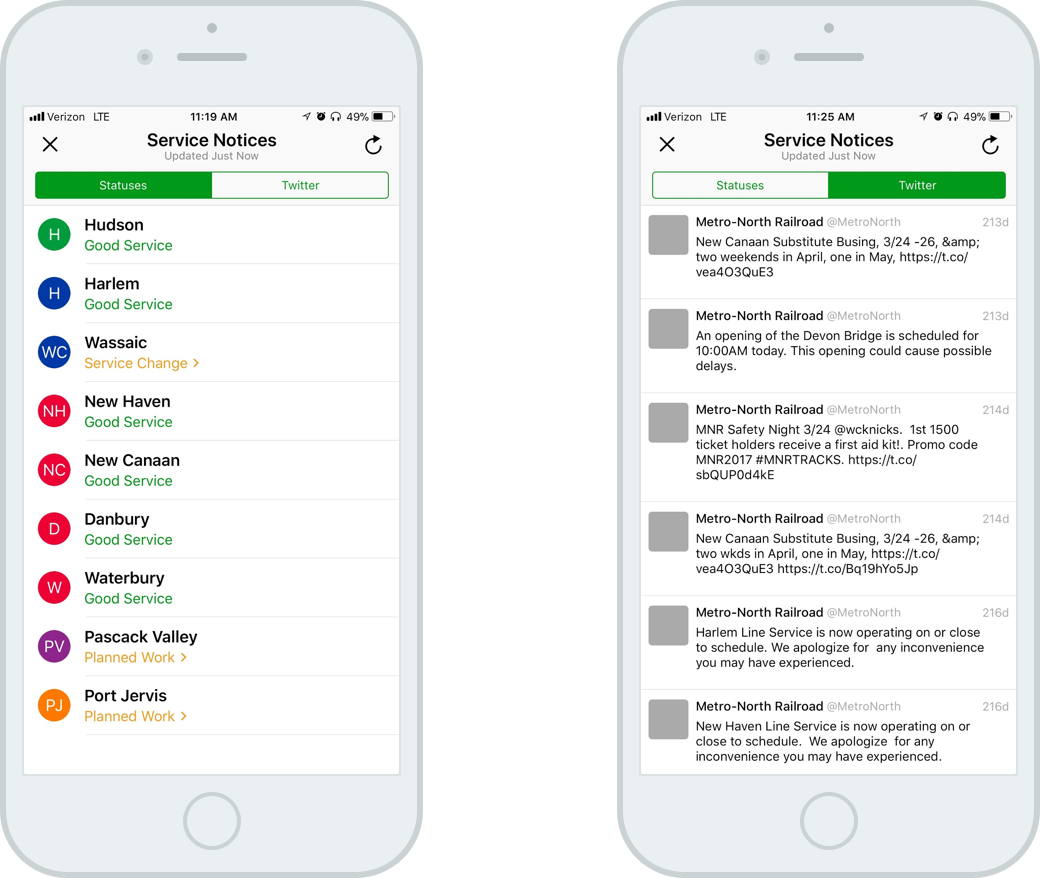 When we settled on brand values for Passenger, our top priority was reliability. We wanted to always deliver a correct schedule, but we learned that there are times when it is near impossible to deliver a correct schedule due to unforeseen events (eq. bad weather, accidents). We began to solve this issue with Service Notices, but there is a lot of room left for improvement. At the minimum, we need to better convey to a commuter that the schedule is incorrect. Then we can work on helping them find the correct schedule.

Another area for improvement is making it easier for a commuter to find the best train. For example, it may make more sense to wait for a later train because it is an express that arrives sooner than a local train that departs earlier. Making it quicker to identify the best train would save commuters time and further aligns with our brand values. 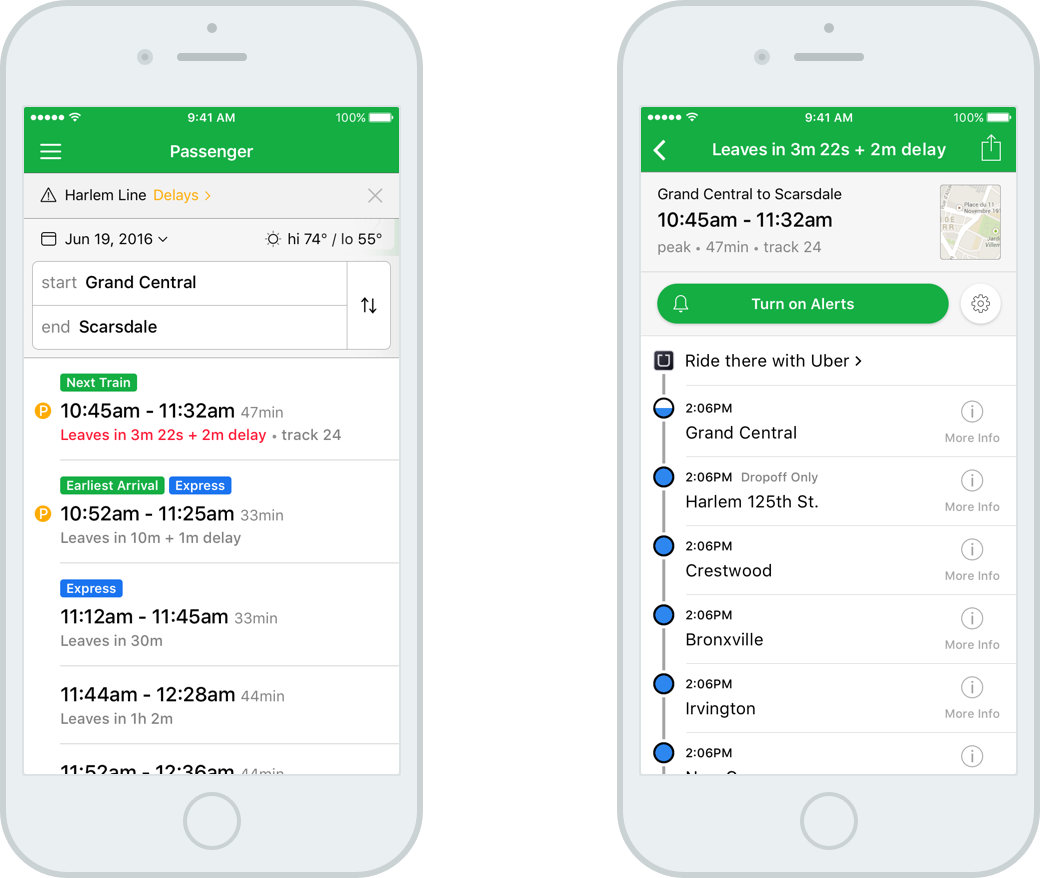 Can't Do Without It (★ ★ ★ ★ ★)
"This is the one app I depend on every day. Reliable schedule and tracks. Being able to message my arrival directly from the app is so convenient. Great to see new features coming up all the time - will certainly be using the Uber link."

Makes Me Smile (★ ★ ★ ★ ★)
"Easy to find my train. I open the app, and immediately see how long until my train. Great alarm feature - before I had to set a separate alarm so I wouldn't miss my stop on the late train home. Love the weather icon - open it everyday just to see the quotes - makes me smile!"

Beyond Exceptional (★ ★ ★ ★ ★)
"As a daily user of Metro North, I was extremely happy when I found out about Passenger. It has made my traveling experience so much more enjoyable!! I highly recommend this app."

Passenger In the News 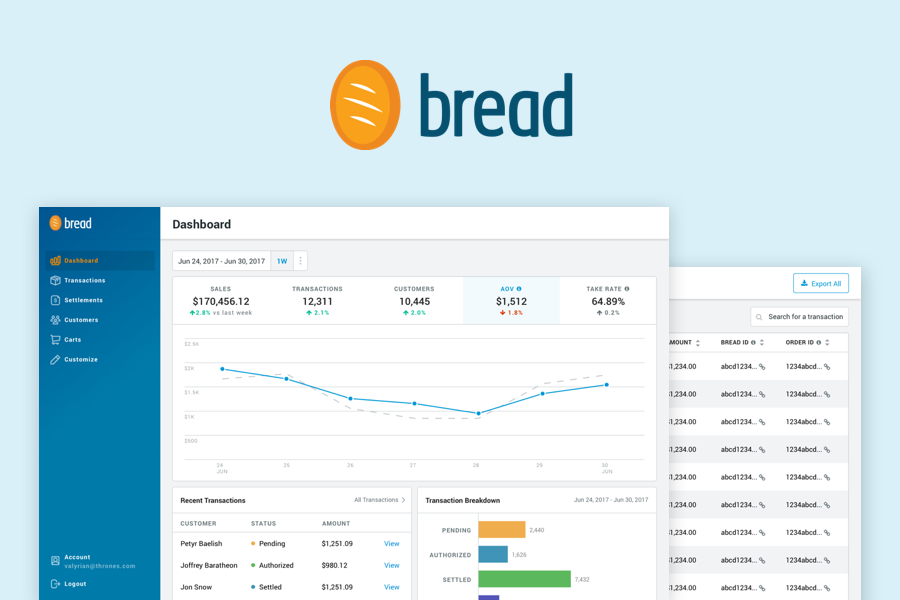 A portal for e-commerce merchants to manage their orders, customers, analytics, and more. 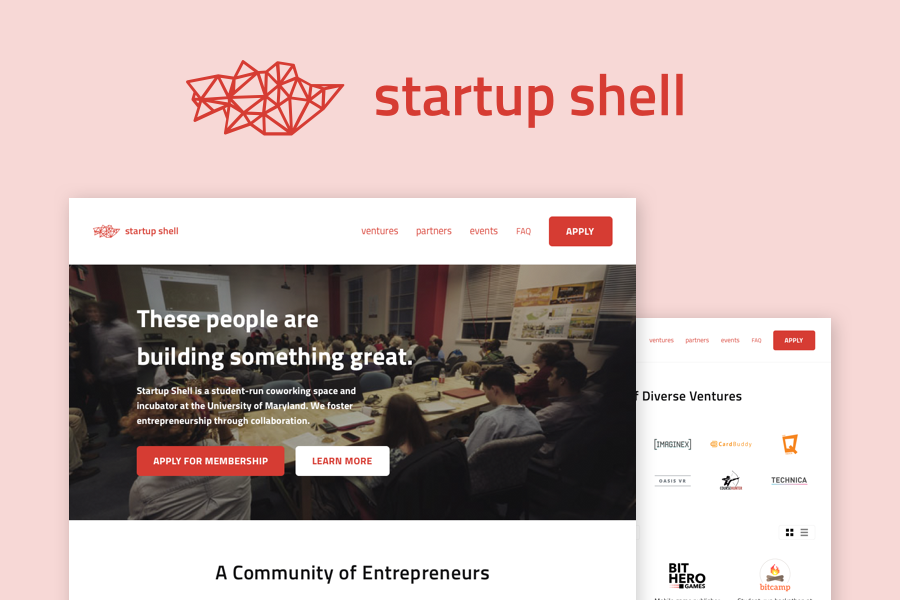 The Startup Shell website is designed to encourage student entrepreneurs to get involved with the community as well as be a source of information for potential partners, advisors, and contributors. 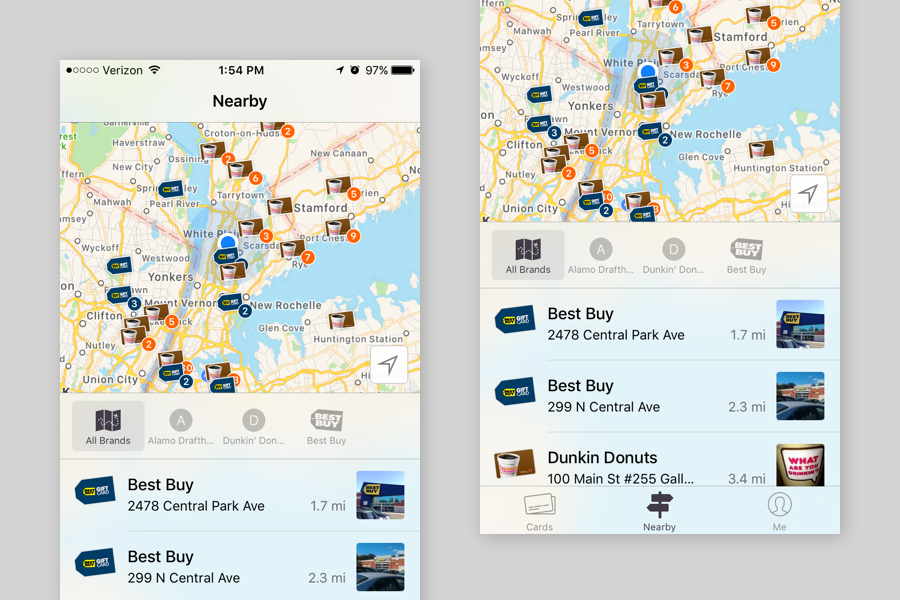 Slide is a mobile gift card wallet that allows you to use your gift cards on the go while leaving your physical gift cards at home. The nearby feature shows you nearby places where you can spend your gift cards.